Last year I explained that the REAL Point of fantasy football is having a great team name. This year I again want to peer into the soul of our nation’s pastime in a search for meaning.

As Socrates would tell you, the best way to learn is to ask questions. Join me as I journey to the heart of Fantasy Football.

1. Why does anyone draft instead of auction?

This question is as hard to answer as “Why are leggings and nothing but leggings now an acceptable leg covering option?” There are really a lot of possibilities but it’s hard to assign blame to just one place. Celebrities do it. Everybody’s doing it. It’s easier than doing laundry. You can go to the gym AND the nightclub in the same outfit. Black is slimming. The list goes on. At least some of THOSE reasons are legitimate. But what about the reasons we draft rather than auction?

Fear definitely plays a part. It’s different than what we’ve been told. And in an auction, you must decide to take an action, whereas in a draft you can just pick from among the next few guys in ESPN’s auto-rank queue. That’s a lot of difference in responsibility. If your team sucks, it’s YOUR fault because you could have bought any player you wanted; in a draft, you got “stuck” with the 8th pick.

There’s also some “everyone’s a winner” involved. According to www.paybyphonebillcasino.uk – in a draft, anyone can luck into the top 3 picks and have a clear advantage. In an auction, the reverse is true. Skilled players, gamblers, and theorists have a much more pronounced advantage when there’s more options on the table at every juncture.

All of those sound like bad reasons to keep on doing something that’s less fair and more luck-based. Fear? It’s the Way We Always Did It? Anyone Can Be President?

How about we Manning Up and auction, everybody?

2. Is there a better team name than “It’s On, Like Ndonkey Ndamukong“?

Mr Sheffield shouldn’t have made fun of his name. (bucpower.com)

Norm Duke’s a Pro Bowler, too.

Matt Fortissimo (for the music geeks)

Favre Dollar Footlong (Not mine, not anyone’s – it’s on every site you can think of)

Henne Given Sunday (see above)

Kolbbled Together (for Eagles fans tributing their O-Line)

An Adrian A Day Keeps The Taylor A Way

Chester Taylor knows what happens when there’s an Adrian A Day. You go away. (getty images)

3. Which Fantasy Analyst should I listen to?

Well, first off, The Sports Geeks provides excellent fantasy analysis. After you listen to us, you can supplement your fantasy information elsewhere. Knowledge is Power, right?

What I recommend is save your favorite experts’ auction (or draft) lists to your computer. At the end of the season, check out how they did.

Look around the interwebs as well, as several bloggers have attempted to compile this information. Don’t just take some dude’s advice because such-and-such sports website told you he’s an expert. Does he post his own results? No? None of them do? OK. So find out for yourself who is worth listening to and who’s just spewing noise.

4. Why is there so much luck in Fantasy Football?

How much luck is there? A guy who almost went 0-14 in 2008 in my “home” league dominated last year wire-to-wire to win our championship.

Fantasy football, more than any other fantasy sport, involves a lot of luck. The reasons are many.

There’s less games – more chance for variance. There’s more tanking – Peyton Manning sitting out 2 of 16 games is, proportionately, sort of like if Albert Pujols sat out 20 games at the end of the baseball season in order to get ready for the playoffs. There’s more players – only baseball has as many participants-per-real-team. Unlike baseball, every successful offensive play requires most of your teammates to be competent. Sure, batting in front of Jayson Werth, in Citizens Bank Park, makes that Ryan Howard home run easier. But in football? If Randy Moss scores a touchdown, it depends on a lot more variables. Tom Brady throws a perfect deep ball. A group of large men successfully block a rival group of large men. Ryan Howard gets several at bats per night whether Charlie Manual likes it or not, but Bill Belicheck can decide he sees a hole in Buffalo’s interior defense and pound it inside with Sammy Morris and Wes Welker while Randy Moss half-heartedly jogs down the sideline with his arm in the air. “I’m open!”

5. Am I highlighting luck in fantasy football to cover up how bad I am at it?

6. Why is fantasy so popular?

I think there’s a number of reasons. First, Fantasy Football is just a cool name for an activity. 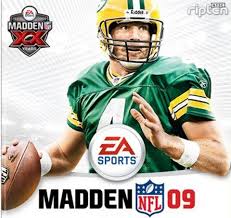 Second, is it still socially acceptable to play video games when you’re 30? Probably not. (Note: I plan to play video games well after age 30. Especially Madden.) But who’s going to scold you for reading some sports pages and sending a few trade emails? Fantasy is sort of a slightly more “age-appropriate” way to play Madden.

The Auction (or Draft) is a great way to catch up with buddies you haven’t seen in a while. My home fantasy football league Draft is pretty much my college reunion. We even order pizza, just like the good old days.

7. Why did you stop posting Awesome Gratuitous Youtube Videos?

Today’s Awesome Gratuitous YouTube Video: Fast Forward To About 1:00 Minute And Watch The Drummer the Rest of Way. http://www.youtube.com/watch?v=ItZyaOlrb7E

I only hope this search for meaning in Fantasy Football has enlightened you as much as Ricky William’s journey to India enlightened him. But if it hasn’t, at least you have some good team names to steal.