Pat previously provided a guide to pickup player-types. Now that you know who’s playing, here’s some help with how to play.

You see, pickup basketball is associated with chaos: everyone running wherever they please, doing whatever they want once they get there, and later, arguing about it. In fact, ballin‘ can get downright dangerous at times.

But it doesn’t have to be that way. Follow my Pickup Principles to stay safe when you’re getting your run in.

This rule is non-negotiable. Don’t talk yourself out of it. Don’t make excuses about your schedule. Don’t!

Friday night pickup is like karaoke night at a bar that borrowed Aerosmith’s sound system: inexperienced amateurs wielding way too much power.

Fridays bring out the once-a-while players who don’t follow the rest of the Pickup Principles. They will run into you, fall down near you, and otherwise place you in proximity to the Injured Reserve. Playing basketball–i.e., running and jumping in a small area with 9 other people while not even looking at the ground–is not something you want to be doing with just anybody.

Your ligaments, tendons, and teeth hang in the balance. Just like your ears would if your drunk friend Jill was brandishing 9,000 Watts of Aerosmith’s Marshalls.

RUN FROM THE REBOUND RACER

Having people who can block out near the rim–whether via their superior size, footwork, or willingness to cheat–is key to winning basketball, because rebounds give you extra possessions. You want the rebounders on your team. It’s fun playing basketball when you get to take more shots than the other team!

There’s a limit, however. If you’re waiting for next and you see the Rebound Racer, you need to move on to the next court.

The Rebound Racer is doing his best Anderson Varejao impression (note the first play), trying to swoop in from 17 feet for the running rebound. The problem is Anderson Varejao is talented at this act; in fact, that’s pretty much his main skill besides being “scrappy” (“annoying” “infuriating” “irritating” “grating” depending on who you’re rooting for). The Rebound Racer, however, will fearlessly sprint from the 3 point line into the lane and launch himself towards the rim, regardless of the 6 other people between where he is and where he’s decided he’s going to be going. Somehow, someway, invariably, every darn time, the guys he lands on are the ones that pay the price for his recklessness.

So what should you be doing if you’re on the perimeter and the shot goes up? Box out! You might get the rebound, and you might be preventing a Rebound Racer from claiming another victim.

This seems simple enough. If you’re running with someone and they play your style/speed/game, ask when they usually play. Why not have a few friendly face around the court?

Don’t argue with your teammates, no matter what. If someone’s a ball-hog or is throwing up knuckleballs from 24 feet, try to inbound to someone else, avoid swinging it to them, even tell them nicely to “look up”. Do what you can, but don’t argue, don’t yell at them, don’t get mad. You will always look like a jerk, no matter how right you think you are. If the guy’s game is so offensive you feel the need to yell at him, everyone else sees it already. No point looking like a fool, because the fact of the matter is he will make a point of passing to you the very next point, and you will miss a shot or turn it over. Accept these facts and you will be well on your way to peace and a lack of embarrassment. 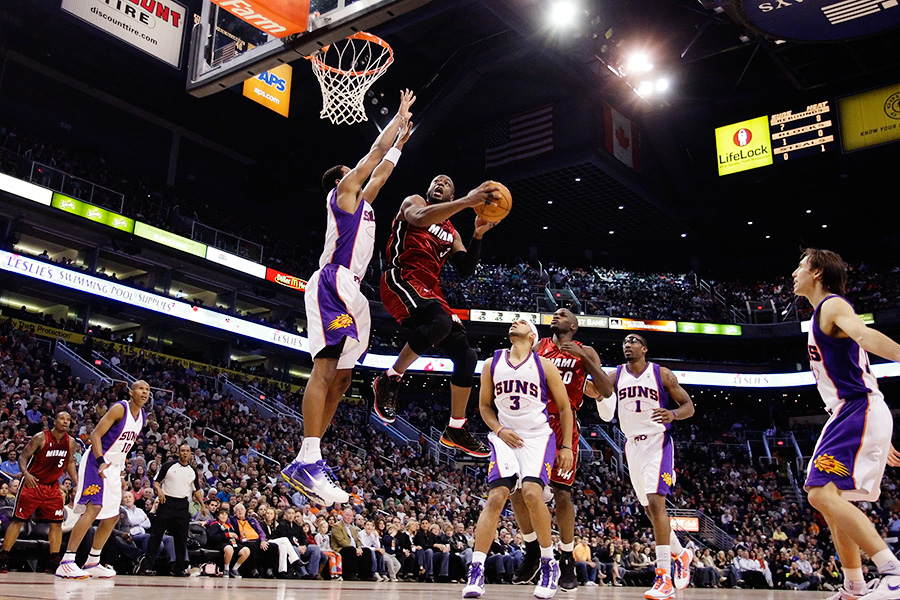 "I think this is safe. Just to be sure, I'll turn backwards in mid-air." Max Simbron via brightsideofthesun.com

Some people play basketball under the following theory: if there’s a player between me and the basket, I can attempt any reckless maneuver I please, because once I run into him, it will be a foul. That may work sometimes for NBA and NCAA superstars, and you may get away with it in pickup games, but everyone will continue to love Dwyane Wade, and everyone will hate you. Just like the Rebound Racer, players who think they’re Dwyane Wade leave trails of casualties in their wake. Avoid these guys before they spin-dribble their way into your Achilles’ tendon. Not that I’m bitter. (Note: My foot is currently Rested, Iced, Compressed, and Elevated, and purple, after a run in with a wayward spin-dribbler.)

← A 2010 Offseason Mea Culpa, or Here’s a QB move in Seattle that makes Cleveland look smart
A Quick Guide to the NFL’s New Playoff Overtime Rules →